Jack Kirne is a writer based in Melbourne, Australia. His work has appeared in various publications including Necessary Fiction, the Meanjin blog, Subbed In and the anthologies Growing up Queer in Australia and New Australian Fiction (KYD). He is currently undertaking a Ph.D at Deakin University. He tweets @jackkirne.

I’ll call him N, because that’s what he went by on Grindr. I never learnt his true name. I could tell you other things, such as his age, which was 27. He was tall, 182 cm, and weighed 83 kg. Although I cannot verify these facts, I can tell you that he claimed to be versatile in bed and on PrEP. His profile said that his body type was toned. This was a lie.

A few months earlier, my partner and I decided that it would be okay for us to sleep with other people. Our sex life, although not poor, had petered over the last year, and sometimes we were going weeks without fucking. We had fallen into a dangerous rhythm: often I would wake to him clawing at my pecs, his firmness already pressed against my butt cheeks. Some might find this cute, but I am not a morning person, and he knows that. Often, I would snap, and he would get out of bed to start the day, dejected. Sex was so much effort. While he made coffee downstairs, I’d knock one out.

I was on the couch, reading, when N first messaged. He said, hey man. That address, “man”, should have been enough of a warning. what u doing? he said. I tapped through his pictures, studying each carefully. He had designer stubble, and an expensive-looking haircut with a fringe that fell to the left of his square face. Most of his photos seemed to have been taken in club mirrors, the light orange and soft. The face he made in each was serious but flirty, his feminine lips pursed. I knew that he was not my type: too masculine, too fashion. I said: hey / just some life admin. How about you?

Grindr is an abyss: open it and see the many torsos stare back into you. Since hitting the apps, I had learnt how easy it is to lose hours firing messages into the inboxes of people who may or may not be real. I did once fall for a scam: a man asked me to register for a sexual harassment register before we fucked—he sent me images of him beat up in hospital and a link to an official-looking website. I had never heard of the register before, the idea was that it created a footprint of your identity, so that should you do anything wrong, you might be traced. I went in, entered my details, including those for my bank card for the $1 donation. I was stupid to fall for it, but I was horny. I was lucky that there was no money in my spending account.

The few men I picked up were mostly duds, nervous sorts who made promises to fuck me hard and then failed to deliver. Their touch was mothlike, timid and fleeting; fucking them was like trying to go with a ghost, their whole bodies weightless even as they straddled me. My partner seemed to have better luck. He was going out and not coming back until two in the morning. Sometimes he would bring his favourites around for a threesome, which I enjoyed. I was jealous, I did not understand his magic. His profile picture was a photo of his smiling face, his by-line reading NOW in capitals.

N asked: Where u located? I told him, and he said, You’re pretty close man. I wasn’t actually, it was at least a twenty-minute drive. Again, that word, man. But that was beside the point: what I knew from this was that the opportunity was there, if I wanted it. N told me he was a vers top, but that he was happy to just make out and play today. I did not trust this and suspected he was angling for a fuck, a point that was confirmed by his follow-up message, in which he asked if I wanted to come over to spoon, make out, and “see where it goes”. I said that I was a bottom but couldn’t be fucked today. Too much red wine, I said. What I meant was that the alcohol and cigarettes from the night before had made my morning shit a watery and pungent explosion but I didn’t want to overshare.

I have been depressed lately. Earlier in the week, I had spent hours telling my friend this at our local café. It’s a shitty place—the staff never remember you and there are horseracing photos on the wall.  But there is a courtyard in which nobody else sits, and so it is a good place to talk. Their coffee isn’t bad either. I told her that I envied my partner; his minor celebrity, his small business, his cool arty-friends who pretended not to know who I was at parties. Unlike him, I rarely left the house.

My friend sipped at her latte and said: “You’ve got to ask, do you want this for your whole life? I worry about this all the time. I’m twenty-nine, I’ve got neck wrinkles. These are the questions you have to answer.” I studied her neck, which was smooth and perfect.

N lived in an apartment in Footscray. The building was tall and grey beneath a white sky. There was a wind blowing. The façade was laced with dust, and on some balconies washing could be seen drying. The building seemed incomplete somehow, a fact confirmed after I dialled the code he’d given me to get inside and encountered the lift, its walls coated in a blue tarp. I rode up to the first floor. The hall was dim. I went the wrong way at first, passing doors with numbers that did not seem to go in any logical order: 103, 112, 105. I’d stayed in places like these before, everything white and quiet, the atmosphere apocalyptic. Eventually, I found his door.

He ushered me in quickly. On the drive over, he’d send me two messages to apologise for the state of his place: he had said it was a little messy coz I’m packing stuff for a move later. This was an understatement. Clean, the place might have looked like any other new apartment, white walls, white tiles. The sitting room at the end was larger than I’d expected, and through the drawn blinds I could see there was enough space on the balcony for an entire outdoor setting. There was stuff everywhere. With N leading the way, I walked down the hall, stepping over two crushed cardboard boxes. There was a bucket of cleaning products at the end. The living room area housed a flat screen and a large shelf crammed with paintbrushes, papers, books and a large glass bowl full of condoms. There were clothes, shoes and underwear strewn all over the place. N threw himself onto a big red daybed in the corner that was also covered in clothes. Either he was a party person or very lonely, I thought. N rolled onto his side and started to grasp at his underwear. Up until now, I had not got a good look at him. He wore a long cream singlet. His underwear was black and from Andrew Christian. He was smiling at me as I started to take off my shoes to join him on the couch. I was not attracted to him at all, but it was too late.

He was a surprisingly good kisser, his tongue forceful and strongly tasting of peppermint. Almost immediately, he set to work undressing me, pulling my shirt over my head, and then struggling with my belt. Once these were off, he grabbed the back of my head and pushed me down.

“Suck my balls,” he said. Tugging the underwear from his hips, I found that these were shaved and perfectly smooth. He was wearing a blue cock ring which, for whatever reason, struck me as tasteless. I sucked at one ball and then the other while he made annoying grunts. Then, he was taking me by the back of my head again and shoving his cock into my mouth, all of it, deep and hard and at once. It was lucky that he wasn’t big, or I would have gagged—I was still feeling pretty hungover from the night before. Still, it was pretty unpleasant, and I wondered how quickly I could get him to cum, so I could leave.

I think he sensed that I wasn’t enjoying blowing him, because soon he was pulling back to kiss me. The taste of peppermint seemed stronger than before.  He tossed me onto my back, forcing my legs up so that he could grind. He smiled, bearing his teeth. There, moving around his mouth was a wad of chewing gum. He leant back in to kiss me, and I thought, God, if I don’t say something now, I’ll have to stay. He slid a finger up my ass. I said nothing.

“Are you sure you want me to fuck you with a condom?” he said.

I thought of saying that I’d told him I didn’t want to be fucked, but also, I knew that if we did, he would finish sooner.

“Yes,” I said. He looked crestfallen but did not object. He shoved another finger up my asshole. His nails were sharp, and I thought, this is my penance. This is what happens when you don’t swim between the flags and take a chance with somebody who calls you “man”. Then, there was the full chode-y push of it, his cock, entering me. I was so shocked that for a few awful thrusts my mind went white. “Hey,” I said. “Wear a condom.”

I watched him get up and go over to the bowl. I was trying to figure out what to say. “I think I might go,” was the best that came to me. But then he was already back, tearing the condom open with his teeth. He pulled the rubber out and blew a short puff of air into it. He fucked hard, forcing my legs over my head. Again, I was thankful he wasn’t larger, or else it would have hurt something shocking. It’ll be over soon, I thought, looking out the window. He was moaning in that annoying porn star way when I felt my guts grumble. There was the rich, spicy smell of shit, and he must have felt it, because he was out then, tearing the condom from his dick. “Ahhh,” he said, “aaahhh.”

“You should clean up,” he said, shuffling away. “The bathroom’s down the end of the hall.”

Naked, I made my way back across the cardboard boxes.

“Switch is on the outside,” he said.

The bathroom was like the rest of the house. ASOS skincare products crowded every surface, spent toilet rolls littered the floor. I wiped my ass with toilet paper and wondered if I was going to cry.

“You can have a shower if you like,” N shouted. “There’s a douche in there.”

The shower was one of those open designs, with a large square bath for its basin. Pink mould was growing along the edge of the glass screen and up the wall. In my bathroom, the walls were high; nobody could reach the black mould that was claiming our ceiling. I thought of how this rarely bothered me, and how lucky I was. What would tell my partner, I wondered. How would I tell him? Was it funny that I’d shit on N’s dick? I thought so. My whole body was shaking.

‘I’m good,’ I shouted back down the hall, tossing the shit-stained paper into the open toilet bowl. I can’t remember if I flushed. 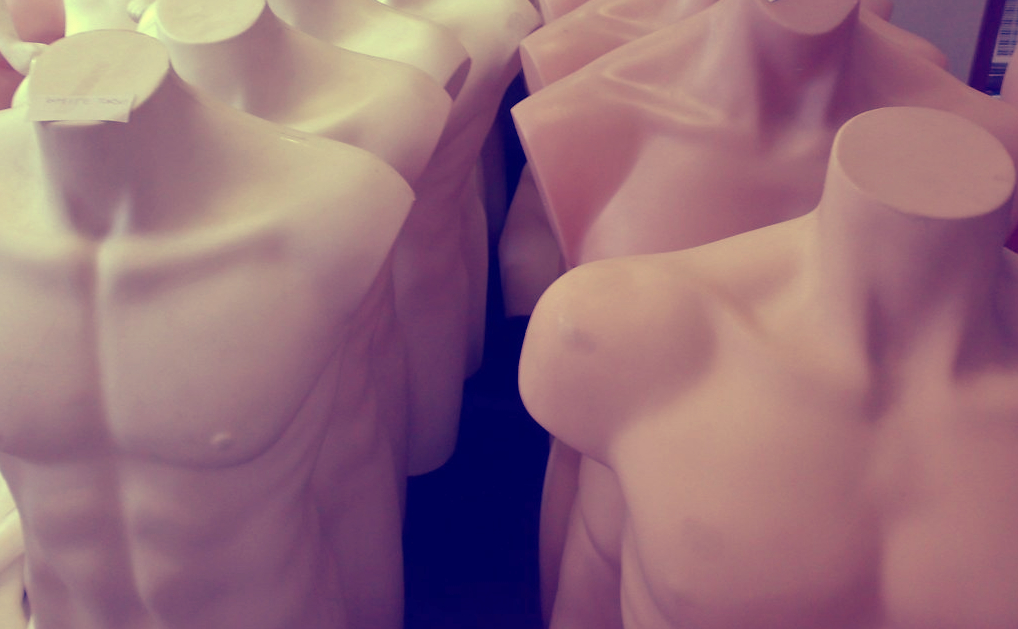