Late afternoons in the back seat, being driven home, I fell asleep and woke up again. The gutters were full of shredded bark and slick leaf matter. Streetlights blinked on. I watched the houses pass without wanting to arrive anywhere. In clumps together, or thin and alone, conifers stood in the spaces between driveways, stark against the umber of eucalyptus.

Why conifers? asks conifersaroundtheworld.com. For their unparalleled beauty, especially cypresses, cedars, firs and spruces, and also the giant sequoias and golden larches. In the clear, rain-shadowed plains of Canberra, conifers seemed gothic and northern hemispheric to me, stark and looming, as though fresh from their displacement from the taiga, the world’s immense carbon sinks. I was surprised to learn that there are conifers native to Australia, too – a great diversity of them, especially in the cold, dry, and austere places like Tasmania, and all along the eastern coast and up into the wet forests of Queensland.[i] In some parts of Australia, according to another website, Aboriginal peoples ate the fleshy stems of the plum pine’s seeds.[ii]

Conifers were driven by competition from broad-leaved trees into regions where there is little competing vegetation, unfavourable places; it is for this reason, the enthusiast at conifersaroundtheworld.com writes, that they are often invoked as symbols of wild, primeval nature. But the conifers I knew as a kid were suburban – introduced.

Some of the garden varieties of coniferous shrubs have full heavy bodies. Unless they’re sick or dying, they are a deep luminous green, sometimes washed through with streaks of either gentle or hot yellow. From a distance they give the impression of being furred, as if the foliage was soft and velveteen. Up close each needle is scaly and coarse, and if you part the branches you can see that at the dark centre of the body is a rough angular spine.

Viewed with half-awake attention from the moving car, the conifer looks as though it must have a dim but glowing interior, some core that gives it its thickness and that quality of turning golden. As though each shrub holds a dense private space inside of itself, like a pregnancy or the bulb of a lantern, or like the home I wanted for myself as a kid.

When I was little, that idea was very attractive to me: a house in the shadow of a conifer. There would be a shaded path to the front door; the windows would be uncurtained, but would offer no interior view. Inside, the light would fall in mute yellowed panels. The walls would be dark, the carpet old and thick and embossed with a texture of blobby shapes, like sheep’s stomachs.[iii] A slender corridor, and at its end a door that opened onto a bedroom with a lamp, switched off and growing cold. No one there. A tall bed with fat quilting, like one I had seen in a picture somewhere but missing the specific bright details – just a gauzy, heavy idea. At night, a porch light left on, as if to supply the scene with a silent middle, like a golden liquid yolk. A line of smoke at the back door.

Over the last century, many thousands of conifers were planted in suburban plots across Australia without consideration for their growing potential. During the 1990s, for instance, leylandii cypresses were commonly planted in gardens across Sydney as houses were built closer and closer together. The vigorous, fast-growing plants made good screens and could be pruned to a slim 40cm thick; the wall of green provided an attractive contrast for plants in the foreground, in a way that was suited to the more formal gardens fashionable at that time. But they grew to dominate modest garden spaces, and their muscular roots got into drains and lifted slabs of pavement. In one instance, an older woman was oppressed in her home by the shrinking sense of space and light occasioned by her neighbour’s leylandii hedge, until, gradually, all growth along the side of her house died and eventually she had to turn on the light at two in the afternoon. At another property, a family home, the hedge next door menaced the kids: the old stone driveway that ran down the side, previously a sunny spot for children to play, became shadowed and grew a slippery mould the owners had to have cleaned off once a year.[iv]

Conifers were also planted by settlers as windbreaks on rural properties, providing some shelter against the weather that buffeted uninterrupted across the limestone plains. On the winding drive from Canberra to the south coast, passing through country towns in those years of drought, I knew the scene – a group of crooked trees with veiny roots, shielding the shoebox sandstone church with its blank windows. For some people it’s a morbid sight, the line of pencil-thin cypresses like a group of strangers standing still, backlit on the crest of a hill or out the back of a town bakery. Like a murder of crows.[v]

Viewed with half-awake attention from the moving car, the conifer looks as though it must have a dim but glowing interior, some core that gives it its thickness and that quality of turning golden.

For some people it’s a morbid sight, the line of pencil-thin cypresses like a group of strangers standing still, backlit on the crest of a hill or out the back of a town bakery. Like a murder of crows.

“I’ll kill you!” my cousin said. He was stabbing an ants’ nest with the butt of a twig. I was watching his boyish wrist, brown and slender under a heavy black watch and shining with little blond hairs. Not as beautiful as a girl’s, dark and healthy freckles spotting his forearms. He roared at me and my eyes widened in fear, but not because of the roar. It was because of his looking at me.

Later he chased me through a row of dumpy coniferous ornamentals, the kind that bordered nearly every verge in Nanna’s suburb in northern Canberra – the ones that, my dad told me much later, were known as arborvitae: trees of life.

Photographed on film in daylight, conifers come out incorrectly, the dark ridges on the trunk too dominating and the bark too pale. The needles look watery and weak. The relationship between sharpness and softness is out of whack. Photographed at night, though, under the orange halogen streetlights of the suburbs, the particular texture, bulk, and glow of the conifer is more fully represented. Photos on newer phones get them near enough, too – it’s only that the colours are too ideal, the sense of depth is too exhaustive, and it is all too easy to take – as dissatisfying as the sudden reprieve of an old struggle.

Conifer seeds are ‘naked’ – they’re not buried in fruit but are exposed, clustered together, on cones. The smeary red sap stains clothing and sticks to skin, pulling hairs out when peeled off. It has a strong, refreshing clinical scent and is highly flammable. One summer, the many hectares of plantation forests that sprawled around Mount Stromlo – pinus radiata – were destroyed by bushfires. Those forests used to keep the soil together and formed gothic colonnades over a maze of gravel tracks. We used to pick blackberries with my mum along the slopes of the creek at the forest’s edge in the summer, before the bushes were sprayed with pesticides.

We went walking around Mount Stromlo with my dad, who used to run along the tracks before his injury, and we took the dogs with us, by then old and sick. The paths were still damp from a morning shower. “You’re growing,” said Dad’s friend, pointing at my chest. She was his girlfriend no longer. The afternoon sun was muted, somehow middle-aged, and I felt faint. There was nowhere to hide. “Don’t tell Dad,” I whispered to my sister, “about the books” – the teen novels I kept under my pillow.

We were driven back home by the woman my dad wasn’t seeing anymore and I kept my hands still in my lap. She asked: “Is this silence because we’re tired, or…?” In that moment, I wanted to stay in the forest somehow, and not to be driven home anymore.

When I was little, a ring of living Wollemi pines was discovered by chance in the Blue Mountains by a bushwalking Parks and Wildlife officer. It was important for people that this species, millions of years old, was still in existence: a pine dinosaur, a lonesome pine, a living fossil and a dinosaur tree.[vi] As though there is still some way to the ancient, to the childhood of the world.

Early settlers were bored by Australian scenery. The landscapes of my childhood were badly disappointing to British imaginations: the dry brown and silver rolling country, just stretching and reaching without drama towards the faded Brindabellas. It is impossible for me to describe the kind of country we were now traversing, Charles Sturt wrote in his diary somewhere west of the Murrumbidgee, or the dreariness of the view it presented. The plains were still open to the horizon, but here and there a stunted gum tree, or a gloomy cypress, seemed placed by nature as mourners over the surrounding desolation.[vii] There seemed to be nothing to say about it and it was not suitable for stories – just car-sick scenery. But according to the same sensibility, raised on wet lawns and rose bushes, there was nothing worth saying about evergreens either: A tree eternally green offers the poet nothing. It defies the logic of association. It is not a distinct idea.[viii] According to this, conifers don’t lead anywhere, but only into their own muffled and sticky selves – and that might seem to be nowhere, perhaps, if you’re shy and a bit frightened.

“Don’t tell him,” I wanted to say, scrambling around in the thick of the spring-fresh cedar hedge. It hurt more than I thought it would. My arms were slashed and stinging. I couldn’t say it, though, and she told her brother in front of everyone anyway – all of those smiling girls heard it – that I liked him. I was surprised to see little nuts growing in the rough, feathery shrubbery. Painful if they were pelted at you. We couldn’t be seen in there and I felt like that was wrong, but our games were realer inside the hedge than they could be outside.

“Can you hear me?” my friend shrieked. “Do you know what he said?” The canvas of my sneakers had new rough little tears in it. I covered my ears, and from the thick of the hedge I watched them all spill out of the wickered mass of shrubbery onto the bright lawn, pulling each other to the ground by the hems of their T-shirts, grabbing at each other’s red raw arms, holding hands.

At night Mum read to me and, in meditation, I hung my anxieties on the worry tree, an old pine. My two worries: that in several million years the earth would end when it was consumed by the sun, and that I, a little girl, would have to leave my tree and let myself be seen. 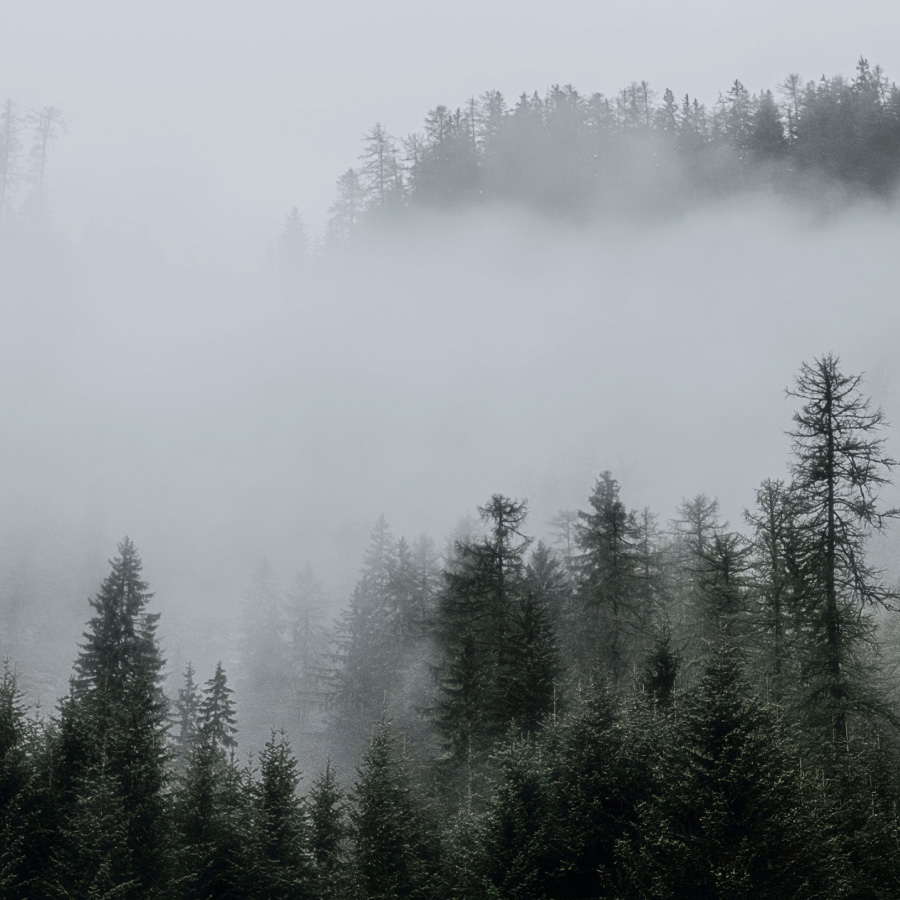