When I was a kid, I was a surprisingly good swimmer. I never really did anything with this ability, because I lack anything resembling competitiveness in my spindly body. Or maybe it’s because when I was doing swimming class in primary school, the scary poolside instructor guy kept calling me Wilhelm. “Backstroke, Wilhelm,” he would yell. “Push up the pace, Wilhelm.” I wouldn’t answer, because it’s not my name, and he would get increasingly apoplectic. Only later did this become apparent: at the time I remember wondering why he always ignored me, and why he hated that Wilhelm guy so much. Then in high school, I entered the breaststroke race at the swimming carnival because I was hot, then I accidentally won and had to go to regionals. At regionals, all the swim-mums hassled me and asked who my coach was and tried to psych me out. It worked.

Well over a decade from the premature stifling of what would have been my golden sporting era, I decide it is time to do something about my incipient heart disease. The problem is that certain time of year when the sun turns the entirety of its broad flaming face to the earth and looks directly at Australia. We call this horrific time ‘summer’ because ‘summer-times you will die from heatstroke’, a little riff which is an example of laconic Australian humour. Summer means that the only plausible exercise is swimming, as it takes place in a pool. I mean, you still get cancer but at least it’s wet. There being an aquatic centre around the corner from my house, I feel like this is meant to be. Admittedly, the hangover is probably a bad idea. For some reason I didn’t anticipate that I would drink so much at a chess-themed party on a Thursday night: I obviously haven’t been playing chess right. My second mistake, it will transpire, will be hubris. You see, I remember my time as Wilhelm, and retain every shred of his cocksure Teutonic swimming arrogance.

Summer means that the only plausible exercise is swimming, as it takes place in a pool. I mean, you still get cancer but at least it’s wet.

So the physical pursuit does not faze me. What I am scared about is the whole administrative side of things. I’m really bad in new situations where I don’t know precisely what to do. I spend the morning in fevered worry that I will create an international scandal when I hang my backpack inappropriately on a nearby child and discover that my swimwear is now illegal. But I am so excited about getting rippling abs and a new pastime that doesn’t involve alcohol that I push on anyway. This is about being an adult. Adults are fit, goal-oriented people who are so terrified of death they will do anything to stave off the inevitable. I too can be so full of goals and fear.

After finding my bathing suit and receiving the necessary permissions from the Heritage Council to take it from its glass case, I strut on down to the pool. Approaching the attractive tanned young man at the desk, I proudly announce, “I’m making my long-awaited comeback to the sport of swimming.” The gentleman blinks and nods slowly. I proceed to thrust money into his hand, and flustered by the lack of direction, say “I’ll have one of your finest pools, please. I understand the general notion is I swim from one end to the other.” He nods again. I shake my head enthusiastically, quite aware that my nerves have given me a psychotic sheen. To cover the awkward silence, I mutter “Rinse and repeat” a few times, before confiding to him that this is all in aid of my health. With exaggerated care, he picks out the six required dollars and sends me on my way.

Despite the problematic progress of my first foray into this bold aquatic world, I’m not ready to give up. That old familiar chlorine smell fills my nostrils like mustard gas, taking me back to a better time. I can almost hear the ghost of a long-dead German yelling someone’s name. I take it as encouragement. The worst lies behind me. Pacing awkwardly around the pool in an impersonation of someone who knows what he’s doing, I discover the sensible planning of three different lanes, from fast to medium and slow. I scoff at slow, and vaguely consider fast. I did used to be Wilhelm, you 36 know. But, considering the fact that it’s been over a decade since I last swam a lap, I decide to play it safe and start off in medium. Maybe when I’ve hit my pace at around thirty laps, I can leap over the barrier like a mako shark and speed out the home stretch.

I dive into the water, and start a few awkward strokes. I am secretly jubilant, as the breathing rhythm and everything just comes naturally. It’s like riding a giant wet bike. I do an entire lap, and things are great. The next thing I notice is that the water is ridiculously warm. Disappointing, yes. The water is also… rather burny. Then it’s really burny. It’s a weekend at burnies. My eyes are spasming in pain, and my skin is crawling, but I’m pushing on. I’m on the second lap, and everything feels wrong. My arms and legs are sore, and it’s getting harder to breathe right. Maybe I’m supposed to exhale more under water, I think, doing so and choking down a lungful. My clean, economical strokes become claws pulling desperately at the surface, and my breathing, even above the roar of the water, sounds distinctly gaspish. This is all wrong. Maybe the water isn’t as buoyant as it used to be?

I clutch the wall, breathing heavily, trying vainly to rub the chlorine from my eyes. Two pregnant ladies are bobbing around next to me in the slow lane. One is worried that she’ll be picked up by the transit officers on the train because she hasn’t got a new concession sticker at university yet. Still clawing my eyes, I shriek at them the valuable news that last year’s sticker is valid until March. They are taken aback. The other one gently suggests I buy some goggles.

I decide to do a lap of breaststroke. If I take it ridiculously slow, I’ll be fine. But I discover it’s hard to stay afloat without momentum. A large walrus-man has lapped me, and is bearing steadily down from behind at what I can only describe as a terrifyingly slow speed. I barely make it to the other end. By this point, all illusions are gone. Either my ability to swim has wasted away along with my beautiful soprano singing voice and He-Man action figures, or I am suffering under a malevolent spell. Regardless of which is more likely – and I have pissed off a bunch of witches on Twitter – I need to do one more lap. Pride pushes me away from the tiles. At one point, I start hauling myself bodily along the lane rope. People are looking at me. The lifeguard is sizing me up. I actually think I’m going to die, startled at the lack of air making it into my lungs.

But I make it, and on rubbery legs I stumble into the change rooms to face the mirror and look into the boiled red pits that used to be my eyes. They are like two meteors jutting out of my face. It’s like somebody tried to pack my eye sockets full of weed and smoke a bong through my nostrils. Suddenly the incredible fear of the pregnant ladies makes sense.

Tired and despondent and skin irritated, I prepare for the final humiliation and hand in my locker key to the tanned young man at the desk about fifteen minutes after receiving it from him. He stares. I stare back. Not so witty and psychotic now, I think. Nevertheless, a rapport had been forged – not a great one, but we each recognise the other’s face – so I dredge the depths of my exhausted mind and trembly muscles, and muster only: “Next time I’m using the slow lane.”

As I brace myself for another helping of tumour-beams, I reason that water is a foreign medium for the human body. It’s like trying to do push-ups in space: your head would explode, and that’s science. I should just power-walk around air-conditioned shopping malls like God intended. But as I watch children and old people slip through the water with the suppleness of well-lubed dolphins, I have to admit that I have simply failed. Which means in a way I have triumphed, because that is also an adult thing: to admit utter humiliating failure is at least as adult as being terrified by the ever-present spectre of our own demise. I walk taller as I head toward the outside world equipped with life’s lesson. I will embrace humiliation. And because humiliation this complete needs a final varnish applied by the most apposite craftsman, I exit the aquatic centre to be faced with a small girl sitting on the stairs playing a clarinet. She looks me square in my scarlet gaping eyes, and with a solemn expression plays two notes.

This is all wrong. Maybe the water isn’t as buoyant as it used to be?

I walk taller as I head toward the outside world equipped with life’s lesson. I will embrace humiliation. 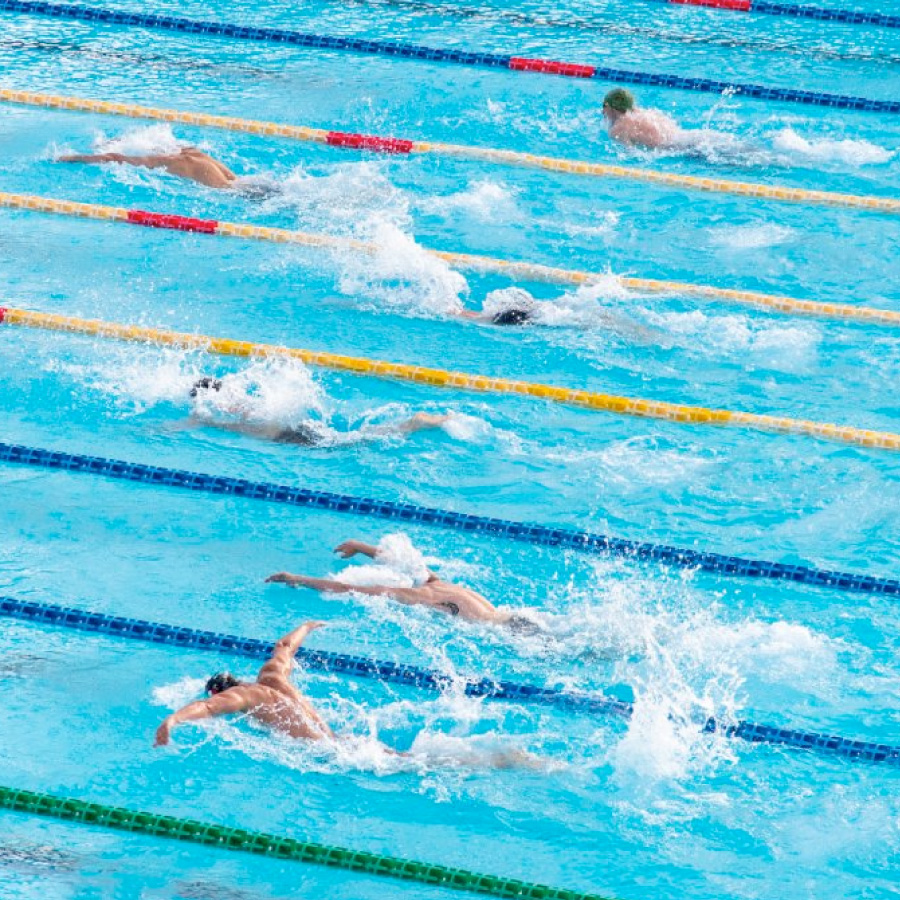