Cat Rabbit is a textile-based artist based in Naarm/Melbourne. Using felt, recycled and vintage fabrics, Cat hand stitches plush sculptural works of her imagined characters and the worlds they might live in. Her work translates to many formats – from children’s books to magazine editorials – always with the aim of bringing softness and warmth to the viewer.

Scott Limbrick is a writer and comedian. His stories have appeared in places including The Suburban Review, Hobart, Westerly, Aniko Press and Kill Your Darlings’ New Australian Fiction 2021, and his (in progress) collection was shortlisted for the Richell Prize. He’s on Twitter at @ScottLimbrick and sends out a weekly flash fiction newsletter called ‘First Dates’.

I wasn’t anybody special, but I did my best. I was a night guard in the largest wing of the city’s most prestigious art gallery, a section dedicated to autostereograms and all kinds of optical illusions. Most people knew of these as ‘Magic Eyes’ but the little card next to each one said ‘autostereogram’ so I tried to use the appropriate terminology. I didn’t know much about art, but I liked being near it. In some ways that meant I had one of the greatest jobs in the world.

My parents had encouraged me to take the position. After a life of working in our small town, helping local businesses with their accounts, they had envisioned a grand, artistic, cosmopolitan future for their daughter. They didn’t exactly know what that might entail, but they believed the arts were where I belonged. So when I finished high school, they gave me a newspaper clipping of a story about the gallery and sent me to the city to make it big. I was happy to give it a try, I just wish they’d told me about these dreams before I was already eighteen. Maybe then I would have spent some time as a child working out a few things in preparation. But we all have regrets, have wishes for our past selves, I suppose. And in the end, if I were being kind to myself, I would say I had made it.

My personal tastes were pretty simple: I liked the art that made you want to touch it. Installations with little houses made out of fuzzy material. Model villages where the people had hair that looked all silky. Giant spiked balls dangling from the ceiling. That kind of thing. But those were in another part of the gallery, and funding was dwindling for extravagances like these, even though they were beloved by many in their own right. So I was in the stereogram section, with its patchwork of wild rainbow pictures made by computers.

I only had one night where I ran into trouble of any sort. It was very late, or very early, depending on your point of view, and I walked right on into the main hall as part of my regular rounds.

Standing alone, the strangest sight in that space, was a tall, bulky man wearing a balaclava. Around him were expensive frames in all sizes, filling up the stark white walls with colours that in all honesty should not have been adjacent to each other. I always found it overwhelming, like standing inside one of those plastic tubes that children put their eyes up against to see different patterns, and him being there made it even more unbearable.

The man’s head was right up close to one of the pictures, one of our smallest but most popular. Before I could do anything, the man noticed my presence and looked right at me. I readied myself for his worst, the potential deeds of a deviant running through my head. But rather than shout, or rush at me, or pull out some kind of terrible weapon, his body slumped.

‘Neither can I,’ I admitted, keeping one hand near the taser clipped to my waist. ‘I’ve tried. I’ve stayed here on my shifts, looking for hours, but my eyes just don’t work right for it.’

‘I’m sorry to have bothered you,’ he said, polite, even ashamed. ‘It’s just, it’s always so busy during the day. I thought, maybe, with more time to try, I – I don’t know. I thought I might be able to get it to work.’

‘It’s not always that simple,’ I said. ‘Some people get to look at the apple. Some people don’t. That’s just how it is for people like you and me.’ I relaxed a little. We shared some troubles, after all.

‘I wanted to be an artist, you know. It’s all I ever wanted, my whole life,’ he said. His voice began to crack. ‘But how can I possibly be an artist if I can’t even see the most popular art?’ He turned back to the picture and moved his head toward and then away from it.

And it was a funny thing. A few years back the gallery had brought in some confident men who had a big idea. What I’d heard is, they had told the board of directors they could help them decide how to lay out the rooms using data. Curators had strong personal views, they said, and weren’t always thinking of the best thing for the gallery as a whole. Instead, the men proposed installing sensors so they could learn, precisely and without any doubt at all, which pieces of art visitors spent the most time looking at. The board had loved this, and implemented their system immediately.

As you can probably tell, what with the hall full of patterns made by computers, some smart young upstart soon enough figured that any kind of illusion would hold the eyes of a visitor far longer than even the most famous Renaissance painting or abstract sculpture. This led to some strange decisions, if you were to ask me. Investments were redirected, and autostereograms were prioritised, and the public was told this is what art was always meant to be. And no one did ask my opinion, because all those board members made these choices for a living, or had made well-regarded art of their own, and had data I didn’t have. So I put my trust in them just like everyone else did. What else could I do?

All that said, the fellow in the balaclava didn’t seem to mean any harm, and I understood his hurt. Some days I even felt it myself.

‘If you come back during the day, there are some interactive exhibits,’ I said, as I drew closer. ‘These pictures aren’t the only thing around, not at all. The other things just don’t get put on the big banners out the front, or get talked about in the papers.’

‘Oh, yeah. Artists you can talk to, clever little works that use mirrors to include you in the image, or anyone else around you. I’m often too tired, myself, but the guard I change over with tells me all sorts of tales about the mornings and the afternoons in this place.’

‘Well, that sounds nice,’ he said.

‘You bet it does,’ I said. ‘So why don’t you just come on down and sit with me at the front desk, talk me through how on Earth you got in here. When the time comes, we can leave together – no need for anyone to know.’

‘Okay,’ he said, stepping back from the picture. ‘Thank you.’

He took his balaclava off, then, but I can’t remember what he looked like. He was just a person, like any of us. I’m sure you can imagine something, and you wouldn’t be too far off. We smiled at one another, then did exactly what I’d suggested.

In the morning, that man and I parted ways forever, and no one disturbed me like that again.

A few weeks on from that encounter, I presented my manager with a list of security flaws the man had told me about. I didn’t give away how I’d found them all. I said I was just perceptive, I guess.

My manager was impressed, and said I’d done a bang-up job. He told me there was no budget for a promotion, but that he’d arrange it so I could choose all my shifts from then on. That suited me just fine. I didn’t care about titles or money. All I wanted was to work afternoons in the wing with the art everyone wanted to feel.

My wish was granted. I didn’t have to set foot in the room with those awful stereograms for the rest of my life. I knew they were there, of course, but now they didn’t have anything to do with me. Instead, I was protecting what I knew was really important, even if some presentation given in an office somewhere said otherwise.

In the evenings, when the gallery closed its doors and the air started getting cool, I’d walk to the station to wait for my train home. I knew a lot of people thought the city was ugly, and getting uglier, but to me it looked incredible.  The clouds were the same distance away from me as the buildings, and the buildings were the same distance away as the people rushing past, and the trees coming up through the concrete, and the streetlights that were flickering on. No matter the time of year, everything always looked so close you might be able to reach out and touch it. That’s how I saw it, anyway.

Scott Limbrick is a writer and comedian. His stories have appeared in places including The Suburban Review, Hobart, Westerly, Aniko Press and Kill Your Darlings’ New Australian Fiction 2021, and his (in progress) collection was shortlisted for the Richell Prize. He’s on Twitter at @ScottLimbrick and sends out a weekly flash fiction newsletter called ‘First Dates‘.

Cat Rabbit is a textile-based artist based in Naarm/Melbourne. Using felt, recycled and vintage fabrics, Cat hand stitches plush sculptural works of her imagined characters and the worlds they might live in. Her work translates to many formats – from children’s books to magazine editorials – always with the aim of bringing softness and warmth to the viewer. 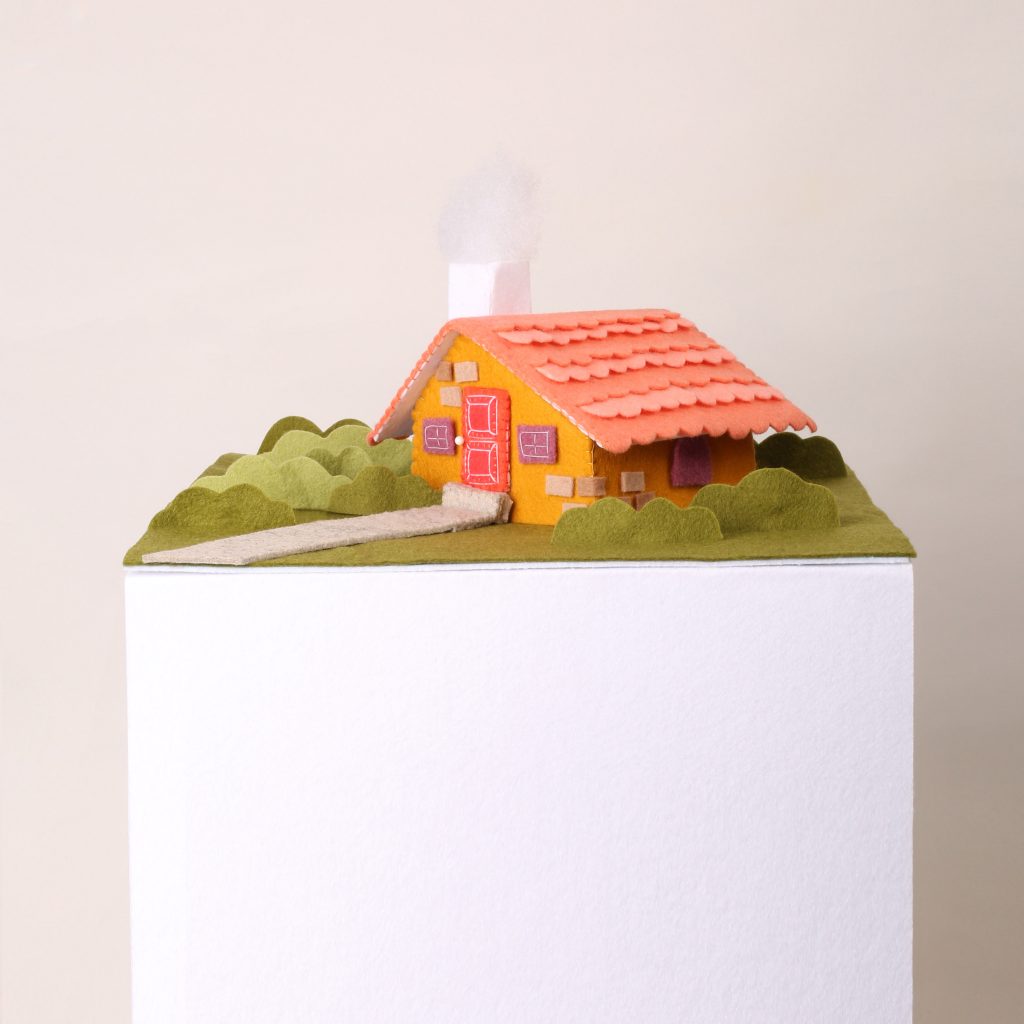