“Yum meh ah[1]?” asks the 14-year-old boy, tucking in his tea towel into his apron after wiping our table down.

Waiter-boy recites this all, “Kopi bing. Teh bing leong bui[2]. Cha.” As far as his Saturday will go, our table is a tap-in. Later on in the morning, families numbering in the tens will order coffees and teas of varying sweetness, creamers, and temperatures.

Lyun Mou[3] puts his brand-new Nokia 8310 on the table. A chorus of ooiyohs rise up and we playfully punch Lyun Mou. We do this to everyone who gets a new piece of technology. We cut the tall poppy. No one should be rich in this town.

“Mo lah. My father give me his old one wan,” Lyun Mou says, showing us some of the scruffs of a hand-me-down. He goes off to order Hakka noodles. Gou Lou picks the phone up and looks for text messages from girls. There are none. Lyun Mou never had luck with girls.

The food hall is still quiet for the morning. Some ceiling fans spin above empty tables. A couple of skinny old men in polo T-shirts drink their Chinese teas, one leg crossed over another to make figure fours, sandals hanging off big toes. The hawker centre manager sits behind his counter, reading the Nanyang paper underneath his glasses.

“Woi, Man U. You got watch Chelsea last night?”

I shake my head. I haven’t a clue why Chelsea asks me this all the time. My family doesn’t have cable and never will. It’s as if he doesn’t know his family is the only one on the entire street that can afford a subscription. Not everyone’s father is a big shot in the public education sector.

“Lampard score again man. Scholes also cannot,” Chelsea says as he shoves his hand in my face to emphasise his point.

“Gerrard shoot harder,” Gou Lou[4] interjects. Gou Lou is a Liverpool fan but doesn’t have a Liverpool jersey, fake or not. He’s six-foot-two though, so that’s why he’s Gou Lou.

“Where got? You got see the goal last night or not?” asks Chelsea.

None of us have. We have to wait for the one-minute sports segment during the news. If it really is a good goal it’ll get replayed on all the channels. Malay, Tamil, Mandarin, English.

Lyun Mou starts playing Snake and I look around for food. We always eat the same stuff but we all feign pondering choices. I order wantan noodles. Chelsea asks me to order curry noodles for him. I know he’s scared of using his shitty Cantonese so I tease him about it. He begs me, “Please, Man U, please, you so handsome.”

The drinks come and the waiter-boy deals with our change one by one. Ten cents here, twenty there.

“What time you want?” asks Lyun Mou and Gou Lou.

“After this lah! One hour only.”

I want to join them but I haven’t told Ma. In those days, I had to ask Ma if I wanted to rob a bank.

“Play what first?” asks Arsenal. “You what also lose.” Teenage cackles from the table.

“Where got lose? I beat gau[6] your ass last time!” retorts Chelsea.

Swearing makes everything funnier. Food starts to arrive and even though we’re punks we still politely gesture for everyone to sik fan[7]. We slurp the original pasta, dab wantans in chilli padi swimming in soy sauce, talk the wind.

“Okay we play Counter again, who lose, who pay.” Arsenal challenges us all. I’m not game for this type of shit. I haven’t procured permission let alone the money to potentially pay for four people plus my younger brother who’ll probably tag along. Ma’s only given me ten ringgit.

“Of course Man U,” I reply. “Owen injure again right? He injure more than he play.”

“Man U got Ronaldo. Nistelrooy. Saha. You think Liverpool win you ci sin[8].”

“How many ball you give?” I never take bets without negotiating. Certainly not if I don’t have the money to pay up.

“Wah, you want ball? You just say Man U sure win. You should give me ball, diuuu!” says Gou Lou. The others laugh. I’m aware more families are arriving, but this is deep Cantonese/Hakka suburbia in nowhere land Ipoh. People swear for punctuation.

“You never gamble before ah? Liverpool home, sure must give ball wan!” I learned this from my uncle, who could’ve written books on soccer bets, or so he says.

I hated playing halves, but if United drew or won, I would pocket the money. Still, you can’t just take the first offer. I learned that from my aunt, who has actually gotten rich from business. All street talk, no university lectures.

“One and half ball,” I negotiated.

“Diuuu, give him one and half lah. Liverpool sure win geh,” interrupted Chelsea, slapping Gou Lou on the back. He’s doing this annoying thing where cups his hand to make it sound louder than it feels, but it often just stings. Gou Lou feints a right cross and Chelsea cowers.

“Sure or not?” asked Gou Lou. Gambling made doubters out of superfans. “You so sure then you go bet with Man U and give one ball then.”

I end up taking the half ball. Can’t say I didn’t try.

“Plaaaay. Why no play? Of course play!”

In my memory, it rained every weekend even though it was dry enough to declare a state emergency during the week. Specifically, it started raining at 5 p.m. after a full day of stroke-inducing sunshine.

“You think the boys from the south will come again?”

Mandarin-speaking gang. They were a little older than us, old enough for driving licenses. They rolled up in a convoy and challenged us to a game of eight on eight, bicycles for goalposts on one end, monkey bars on the other. One of them could tackle like Gennaro Gattuso and slammed Lyun Mou like a mah-jong tile.

“Maybe. It was quite fun. Play more people always better.”

“Those boys from your school?”

“I don’t think so. Maybe from Ampang. Never seen them before.”

We order a second round of drinks. Water pools around the coins we’ve left on the table. Flies buzz around in their grand game of musical tables and start fires when they land on uncleared dishes.

“Woi. Man U. Your girlfriend how?” asks Chelsea.

“Diu. What business you have,” I tell him, flicking the pooled water on the table his way. I make a note I haven’t even made a move to kiss let alone hit any wheels.

“Diu, don’t play with water,” says Lyun Mou as he flicks water right back at me.

“Diu, got people around, don’t play!” says Chelsea as he takes it to DEFCON 3 with the flicking.

Waiter-boy takes nine drink orders at the next table where sits a family of three generations, maybe four. The Malay roti canai seller whistles, alone in his language island. Two vendors yap about business across an aisle. They’re not angry, they’re just shouting.

I think about it. “No, but her father likes Real Madrid.”

“Woi, so later how we win if they come?” asks Chelsea.

“Aiyah. Easy lah,” says Gou Lou, who’s seen Shaolin Soccer one too many times. “Lyun Mou is goalie. Roll ball to Chelsea. Chelsea, you one-two with Man U brother, then pass to Sei Ngaan Zai[12]. Sei Ngaan Zai shielding very geng[13]. He give to Dai Sei Ngaan Zai[14]. He cross the ball to me. I make one firework and dribble past two guys, cross the ball to Man U. Man U, you chest the ball to Gwong Tau Zai[15]. Gwong Tau Zai fake shot, give to Baau Ngaa[16]. He one time volley with his golden leg—! Goal.” He slams his glass of ice down on the table, now empty of kopi.

We scheme, we connive, we plan. We race each other on our one-gear bicycles to the cybercafé and kill terrorists and electrocute orcs. We are Ahn Jung-hwan, Jet Li, and Chapman To in Initial D, all in love with Twins, Jolin Tsai, and girls in light blue uniforms.

The call to prayer comes on. It doesn’t concern us, for we only pray to the God of the Posts, who deflects balls towards the imaginary net rather than away. Chelsea shouts at Lyun Mou, “Woi, you blind ah? Why you never pass the ball?” Gou Lou plays on even though the ball has definitely crossed the imaginary line. Someone mishits a ball into another one’s nuts. We laugh into the dissipating humidity, late into the evening when the insects come to life, rabid with the prospect of buzzing streetlights.

Caked in mud, a toe blackened, memories afresh of the one perfect goal, we go home to different names. 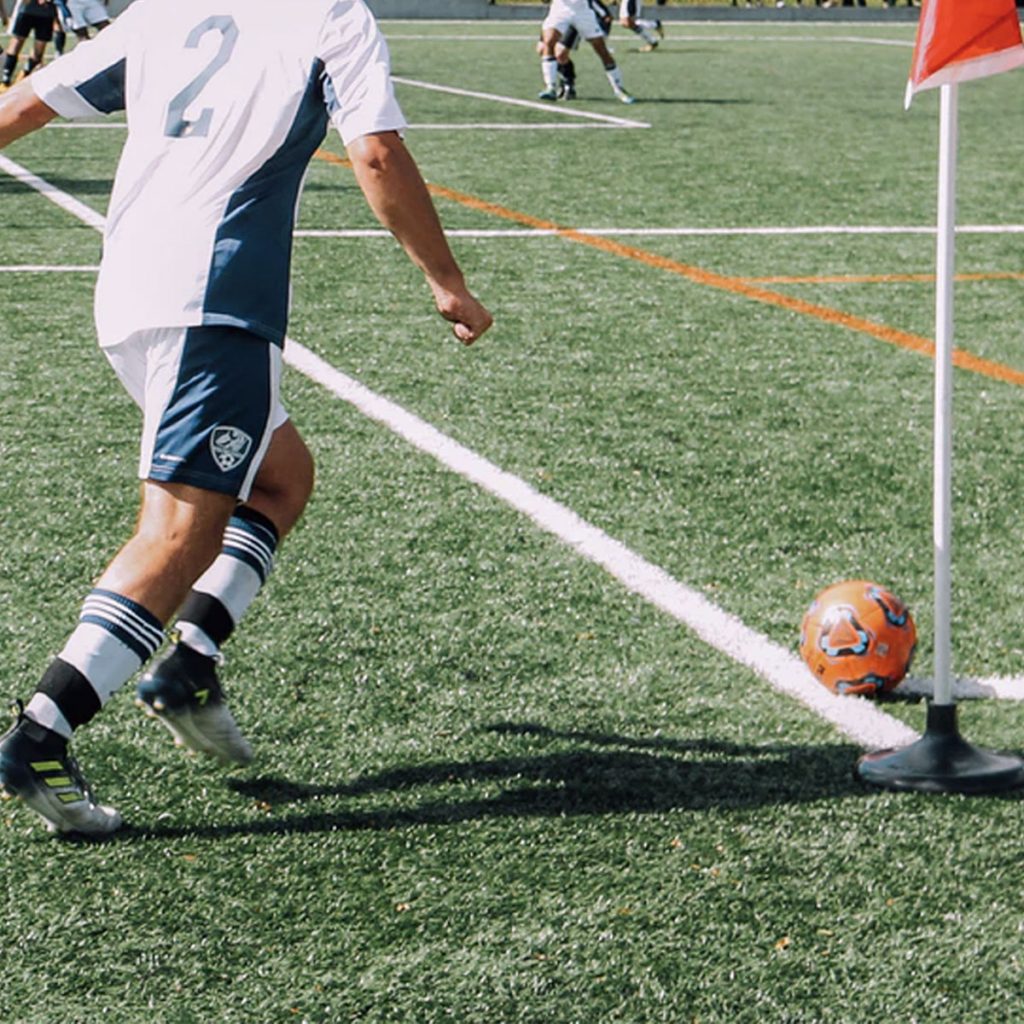